In July this year, Loan Market Warrnambool broker Samuel Arthurs won the award for Customer Service of the Year – Regional at the Australian Broking Awards hosted by Momentum Media. 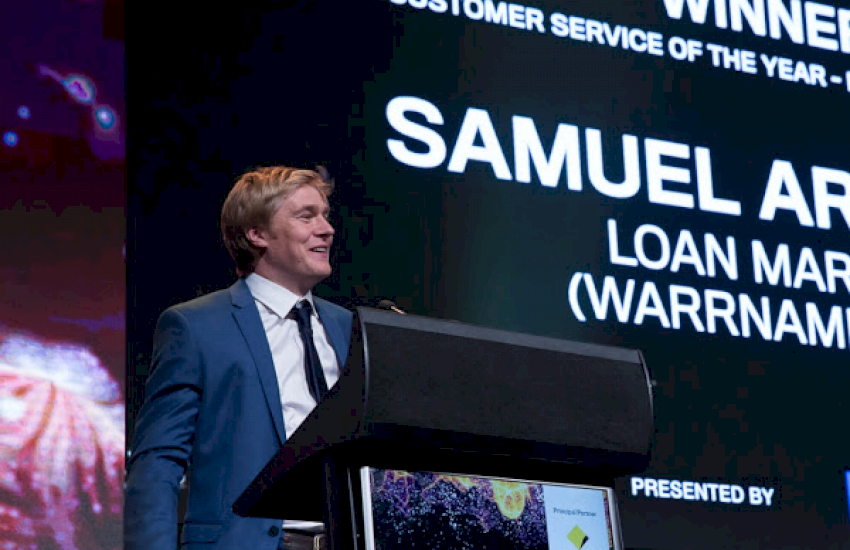 We caught up with Sam at the event to find out how he overcomes the challenges of operating in a regional market by providing his clients with the highest quality service.

How did you start broking?
I started as a PA for a local mortgage broker, Gary Stricklen, who I worked with for two years. My job was wholly and solely to work out if a deal was going to be declined or approved. After getting a diploma, I started doing appointments and putting deals together.

Eventually, Gary asked if I wanted to start off as a sub-contractor rather than being on wages, so I moved to that for a brief period. He later changed his business and there was no place for a sub-contractor in there, but I realised that it was probably a good time to go out on my own, so I spoke to the local Ray White.

I said to them: “I won’t be working on wages, so is there a way I can take business from you?” As luck would have it, they said that’s what they were hoping someone would do.

How has broking changed since you first joined the industry?
It was a lot easier. I once spoke to someone who said they got into broking because they had seen how many days you could have on the golf course! It definitely doesn’t look that way now.

It was a lot easier and lot simpler to operate then, which was probably the best way to learn something – from the ground up.

Also, at the time, we had a lot more clients in that business that had already been knocked back by a bank. Now, my clients are coming fresh. They often don’t go to a bank at all.

How do you generate your leads?
I have three real estate agencies that get me business. I’ve got three accountants and one financial planner, so across those I’m pretty busy. They tend to refer maybe three or four leads a month.

Having a good relationship with referrers is probably more important in the country than anywhere. The country’s small, and everyone knows everyone, so it’s very easy to lose referral relationships just because someone is good friends with someone else. You really have to show your benefits. You have to show why you’re the broker for them to choose.

What are some of the challenges associated with operating in a regional market?
It’s usually a challenge to make deals profitable, because loan amounts are smaller. In Warrnambool, home loans are typically between $200,000 and $300,000. Quite often, I’ll write close to 100 deals, and of those deals, I’ve only settled $24 million.

Also, clients from regional locations are not typically computer-minded. We’ve got a really good system at Loan Market with an online information document, but getting clients to have a go at that is probably half my battle! Once they start doing it, I get all the information and make an appointment. Very seldom do I drive out to them. They’ll come and see me.

There are also geographical challenges. If I’ve got a client in Hamilton, that’s an hour away. If I’ve got to meet with them, I’ve got to be aware that timeliness is important to keep the real estate agents happy. It’s no good taking on a client and meeting with them after a month because, chances are, they’re not going to be interested in the property – they want to sell them at that time.

Skype appointments are massive for me, it’s an old system but most people know how to use it or have used it. Any sort of way that I can get to people without actually physically going there is really important.

What do you think sets you part from other brokers?
I think it’s definitely my attitude. I like to keep informed. I just think you’ve got to know what’s going on in your industry and you’ve got to know now. For me, my knowledge needs to be where a city broker’s is, and I think that’s probably what sets me apart – that attitude to go forward and have that breadth of knowledge.

I’m also quick to respond to my clients.  Generally, within 24 hours I’ll get back to them, whereas I know for some other brokers, it might be three or four days before they respond to an email. That’s just not good enough.

Knowledge and the ability to get back to clients is so basic, so easy and so cheap, but people just don’t do it.

What are your future plans?
I’ve got to decide, should I scale up and get a couple of staff? What does that look like? Do they become brokers? Now that we’ve got some certainty in our industry, I’ve got to work those things out.

For me, the service offering is so important that I often worry that if I take on staff, a client’s going to feel alienated. I had one client say to me that they love using my service because they know they get me. That made me wonder whether I should stay the size I am and keep doing a hundred deals a year and there about. It’s a lot of work but at least people know they can come to me and that service isn’t compromised by trying to get bigger.

Naturally, as you grow your business, you need to have people in the positions to look after those clients. As soon as I start to feel that I’m neglecting a client, I’ll know that the time has come to take on someone to look after the existing book.