On 8-11 October 2019, The Adviser hosted its EU Study Tour in Dublin, Ireland, to enable Australian mortgage brokers to learn more about the challenges and opportunities faced in different markets across Europe. 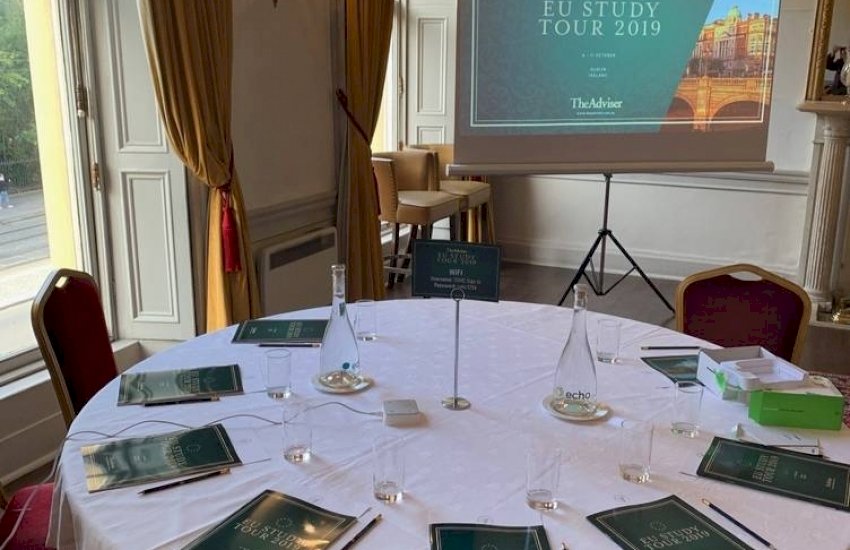 The Adviser EU study tour featured an agenda that looked at key learnings and experiences of EU markets.

The three-and-a-half-day conference aimed to equip forward-thinking mortgage professionals with fresh strategies for business success at a time of great change.

Over the past year, Australia’s third-party sector has been under a massive amount of scrutiny, change and disruption. The recommendations put forward by the banking royal commission called for brokers to be paid by consumers, for regulation around the standards to which brokers are held to be changed, for greater insight and data capture in the mortgage process – among a swathe of other modifications.

Given all these factors, this year The Adviser curated an agenda that looked at key learnings and experiences of EU markets that have already implemented similar structures, in the hope of providing Australian broking industry members with the know-how to not only understand the challenges and opportunities faced by other markets – but the inspiration for leapfrogging over some of the issues those markets have faced as well.

Whether it was learning how and why the “Netherlands” model works in practice, or looking at the regulatory changes being consulted on in the United Kingdom (which Australian regulators closely follow), or considering the ways in which brokers in overseas markets are delighting customers and raising the service bar – the conference aimed to show how brokers are coming out on top and how we can learn from their experiences.

The Adviser brought together 12 speakers to unpack how they have adapted to increasing regulatory focus, the impact and opportunities of open banking in the UK and the increasing pervasiveness of machine learning, how the Netherlands market works in practice, the resurgence of execution-only and what this means for mortgages, why UK brokers offer insurance protection, and the potential ramifications of Brexit – among other topics.

Opening the conference, Kimberley Hyland – mortgage manager of Broker Ireland Network Services – outlined the state of the Irish mortgage market, which is still recovering from the recession of 2008.

Ms Hyland noted that the Irish mortgage market is relatively small, with just 25 per cent of all mortgages written by mortgage brokers. This is partly due to the limited number of brokers in Ireland (less than 1,000) and the fact that Irish brokers have to qualify as financial planners to write a loan.

Ms Hyland also explained that only a handful of lenders operate in the Irish market, which is largely concentrated in the capital, Dublin.

In fact, Ireland is one of 16 EU countries to have introduced some form of mortgage regulation to help safeguard their national financial systems since the Global Financial Crisis, with the Central Bank of Ireland bringing in mortgage measures in 2015 that limited the amount of money that an individual or couple can borrow to buy residential property.

These limits are based on the income of the borrower (loan-to-income or LTI limit) and the value of the property (loan-to-value or LTV limit).

While lenders can utilise their discretion and apply exceptions to these rules, this interventionist action aims to safeguard financial stability and contribute to the long-term resilience of the financial system and ensure that banks and other lenders lend money sensibly.

The measures are also designed to stop house buyers from borrowing more than they can afford and prevent excess credit from building up within the Irish financial system.

Mortgage lenders in Ireland are also now legally obliged (except in limited circumstances) to ensure that borrowers have mortgage protection insurance in place.

This session provided an eye-opening view into how strict lending controls can drastically change the shape of the mortgage market – and gave a stark warning not only of how restrictive regulation can be, but of how long the effects of recession can be.

The conference also heard from several leading finance representatives from the United Kingdom, who provided insights on how regulation is changing in that market and what it could mean for Australia (which closely liaises with the UK regulators). Delegates also learnt about the factors that have helped to steer the broker market share in that country to its current level of 70 per cent and how open banking is working in practice.

Robert Sinclair, head of the Association of Mortgage Intermediaries UK, gave an impassioned session touching on the changes the financial regulators have brought in and their impact on the mortgage and broking industries, including the new “cheapest first” requirement for brokers.

Mr Sinclair suggested that the changes have contributed to a “dislocation” of the market, with lenders’ profit margins being squeezed, and the unintended consequence of impacting smaller lenders and therefore reducing competition – but providing another feather in the cap for the broking industry.

He also noted that the regulators’ role appeared to be changing, so that their focus is beyond pure regulation, for example – by focusing more on wellness and culture, as well as adherence to the law.

Also discussing the UK market, the CEO of broking network Mortgage Advice Bureau (MAB), Peter Brodnicki, unpacked the MAB model and particularly focused on how UK brokers are more focused on offering mortgage protection for their clients. Mr Brodnicki suggested that Australian brokers could – and should – seek to offer insurance to their clients as part of a moral obligation to protect them from hardship.

Looking ahead to the impacts of open banking, the CEOs of three fintech companies walked through the new open banking regime in the UK and how it will provide more opportunities for consumers, brokers and lenders alike.

The CEO of FriendlyScore, Loubna Bazine, alongside Credit Kudos CEO Freddy Kelly and MogoPlus CEO Dean Hawkins, noted the slow roll out of open banking by lenders and outlined the innovations that their respective tools can provide both lenders and consumers by looking at different forms of data outside of the traditional credit score.

Given the rapid uptake of open banking (it is estimated that there are now approximately 120 million API requests per month), the panellists outlined that one of the many benefits of open banking is the democratisation of finance; opening up finance to those previously underserved by the system, such as new immigrants (with no credit score) and those paid cash-in-hand. They also outlined how the new forms of data being received is providing a more accurate and rich outline of customers, enabling a more personalised banking offering. This could, in near future, result in lenders foregoing the need to assess expenses information received (such is the trust in the data).

Data and machine learning was also the topic of the day on the second day of the conference, when delegates visited the Google HQ in Dublin to hear from Google’s head of machine learning innovation, big data and insights, Dònal Doyle, about the mind-bending and real-word applications of big data that could soon be used in everyday life.

The session concluded with a tour around the Google EMEA offices.

The 40 Australian delegates also heard from Miguel Sard, managing director of the mortgage arm of Satander, who outlined the way the Spanish mortgage market works (offering even a 25-year fixed rate mortgage and a negative interest rate) and how property in Spain is relatively cheap given the surplus of housing.

Mr Sard also focused on how he is spearheading the digital transformation of Santander’s UK mortgage proposition, detailing that he believed execution-only would be the next big thing in the UK, given the regulator’s stance on the mortgage offering.

The UK’s financial regulator has been consulting on relaxing the rules around standards around execution-only policies (i.e. providing a mortgage without advice on the relative merits of the transaction), in a bid to make switching or refinancing loans more efficient. Lenders such as Santander have been supportive of such a change, as they believe it will make buying a mortgage online easier and encourage more engagement from the market if they “do not feel that the face-to-face method is for them”.

The Netherlands market was also delved into during The Adviser EU Study Tour, given the royal commission’s focus on this model, with Lloyds Banking Group’s director of strategic partnership, Esther Dijkstra, outlining that while this model has been somewhat successful in the Netherlands (with just 1.6 per cent reduction in the size of the mortgage market – largely due to “natural attrition”), it is operating in a very different landscape.

Ms Dijkstra revealed that, since the Netherlands banned broker commissions in 2011, brokers are now charging consumers around €2,000 for their advice, but the biggest challenge is still around convincing consumers to pay the price.

She also suggested that the relative success of the change was due to the format of the lending landscape in the Netherlands. For example, she outlined that 40 per cent of new lending is for a fixed interest rate loan over a term of 20 years. Therefore, the majority of borrowers would only expect to pay brokers once or twice in their home loan journey (unlike in Australia, where consumers frequently refinance).

Ms Dijkstra noted that a 100 per cent loan-to-value ratio loan is a common offering in the Netherlands and that interest payments can be deducted from income tax, so the cost of a broker’s fee can be offset by savings in these areas.

The second day of the conference concluded with an entertaining, informative and thought-provoking presentation from BBC Newnight’s political editor, Nick Watt, on the implications of Brexit for Ireland – given the major implications the introduction of a hard border between Ireland and Northern Ireland could have on the economy.

On the final day of the conference, delegates heard first-hand experiences of broking in Ireland and Northern Ireland, and the major differences between the practices in the republic and UK arms of the Emerald Isle.

Irish broker and financial planner David Devine (from Platinum Financial Group in Bray) and Northern Irish broker Ewan Richmond (from Mortgage Advice Bureau in Enniskillen) discussed what broking is like in Ireland and Northern Ireland, and highlighted the challenges and opportunities they see in the future.

Listen to The Adviser’s Elite Broker podcast episode, recorded live in Ireland, to find out more about how broking in Ireland and Northern Ireland differs.