At The Adviser Better Business Awards 2019 in Western Australia, hosted by Momentum Media, Travis Meyer was recognised as both Best Newcomer and Rising Star. 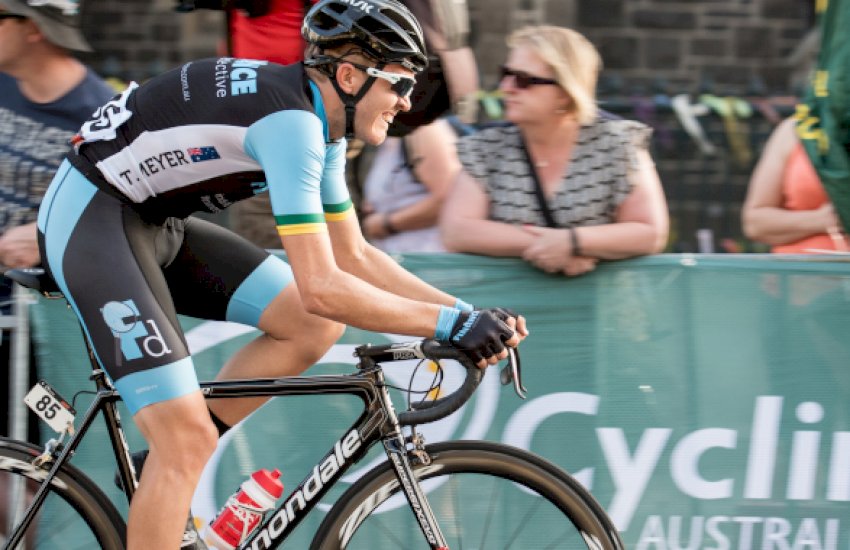 This was not a modest achievement, given that Travis was a professional cyclist until early 2017, when he unclipped from his bike for the last time to become a mortgage broker with Perth brokerage Finance Detective.

The story of how and why the Australian National Road Race Champion took the off-ramp into broking is worth telling.

In 2010, Travis rocketed to fame when he came first over the line of the 182.6-kilometre Australian National Road Race, earning him the right to wear the champion’s green and gold jersey. At just 20 years old, the young cyclist broke away on the final lap of the elite men’s road race to finish a whopping 31 seconds in front of the next cyclist. No mean feat for his first professional race.

Reliving the experience, Travis told Momentum Media: “It was pretty awesome pulling on the jersey for the first time. I went into the race not expecting to win, so it was quite a surprise. I mean, some of the biggest riders in the world have won that race, so it was pretty special. I won’t forget any moment of that race… That would be my greatest accomplishment, along with my junior world titles when I was around 16 or 17.”

In all, Travis spent four years on the World Tour and a further three with Pro Continental outfit Drapac. However, after a stint racing in Europe, the cyclist started to think of coming back home and retiring from professional racing.

He explained that a “horrific” training accident in Andorra — which left him with a fractured skull, a jaw that needed wiring shut, a broken arm and a bruised lung — left him questioning his career choice.

“It was a horrific accident and that was one part of my trigger to retire,” he said.

“It was an accumulation of different factors really, but definitely that was probably the biggest moment where I questioned cycling a lot more, because it’s such a dangerous sport and I’d had a few injuries before that too. When that one came, that was a bit of a nail in a coffin in a way. I still got another two and a half [racing] seasons out of myself after that, but it was a lot more difficult after that point.”

He added that moving back from Europe to Perth in 2013 also made him start turning his mind to other interests.

He explained: “I moved back home at the end of 2013 and was still racing professionally, but travelling from here, because it was a different lifestyle. Before I was living in Europe and travelling around Europe, but when I moved to an Australian team that was based here, I was racing in Asia and America.

“I started to realise how much I enjoyed it here and started to get other interests, so over time my mind slowly started to move into another direction… When I moved back to Perth, me and my wife bought a house in Glenbrook, out in the hills where we grew up. We used a broker to get our finance approved and I guess that was a starting point to what made me think towards broking,” he said.

“I didn’t know what it was at all when I was buying my house, until I got introduced to Anthony Vodanovich from Select Mortgages, who was my agent’s broker. I was curious about it. I mean, these people come to your house and go out of their way to do all this work for you and you don’t have to pay anything? It’s amazing.

“When I started researching, I found that just over 50 per cent of people use a broker. It’s bizarre it’s only half, because we had a great experience with him and he made the process really easy. Being first home buyers in Australia as well, we didn’t know the process, so he took us step by step and made it as easy as possible. I really don’t see why people don’t use brokers more.”

Travis said he decided to retire “early in 2016”, and started to look at different professions and subjects to study. It was when he started looking at property and finance that he realised broking was the profession for him.

“I was seeing how client-focused an industry it is. I’ve always enjoyed networking and talking to people and making those sorts of connections, so I looked at the whole package and it all fit in pretty well.”

Breaking into broking
As fate would have it, it was actually while on a ride that the champion cyclist got an ‘in’ to the broking world. The introduction came through a contact at recruitment company Stirling Andersen, who invited the champion cyclist on a ride in Perth with his cycling community. It was on this ride that Travis met a recruiter who mentioned that Finance Detective was looking for a part-time broker.

“I thought I may as well do some studying and work experience when I wasn’t racing, so that is where I got hooked up to Finance Detective,” he said. “Cycling has come in handy for a lot of different things!”

Travis completed a seven-month internship with Finance Detective and passed his Certificate IV. He then hung up his cycling shoes for good in January 2017, after competing in the race that had brought him fame in 2010. But he took advantage of his swan song, ensuring that all the cameras and journalists knew where he was going after racing.

He explained: “If you’re not racing in a team, you need to wear plain kit. So, I came up with an idea… As a bit of marketing I got a design made up in [Finance Detective] company colours, with my name and my email address and twitter handle and all that sort of stuff in a cycling kit. I thought it was a great opportunity to put my name out there and make them aware of what I’m doing. I teed up with a few of the social media people to push my brand out there when I was at the race and they did an exceptional job.

“I came 6th in that race and I was really, really pleased with that, because I didn’t race too much [the] last year, and that takes its effect on you. There are some guys that did full seasons of racing and I only clocked up around 30 race days, which is nothing really. So, to come out and be in contention to win the race, I was over the moon. I couldn’t ask for anything better. And the kit thing seemed to work out quite well too. Hopefully I’ll see some benefits from it.”

Under the mentorship of Warren Dworcan at Finance Detective, the budding broker has gone on to excel – with his honours at The Adviser Better Business Awards being the icing on the cake.

Although he’s enjoying his career move so far, he concedes it’s harder than he initially thought it would be.

“Since I started in this industry, what really surprised me is how complicated people’s financial situations can be,” he said.

“I don’t think I’ve seen one straightforward loan. There is always something there that throws a spanner in the works. Some people are self-employed. Some people are in a decent amount of debt. Some people have guarantors that live abroad. There’s no straightforward deal, which really surprised me. It’s also been a bit of a shock learning which lenders accept certain things and trying to keep tabs on all of that.

“It goes to show why brokers are so important, because things aren’t as clear-cut as walking into a bank, getting a loan and off you go.”

Although the new broker may have said goodbye to his professional racing days, he says he’s not stopped cycling completely.

“Cycling is a great way to network with different people,” he said. “They say cycling is the new golf, so there are quite a lot of people that are keen on riding and I’m lucky, being an ex-professional, that it opens up a lot of doors.

“Generating leads is one of the more difficult aspects of what we do, but I’m obviously utilising my cycling connections that I’ve made over the years, so that’s my target audience to begin with.

“I’ve made a lot of connections in the finance industry while cycling… But I don’t think I’d ever go back to it at a professional level. I love riding my bike still, but the lifestyle of a professional cyclist is pretty tough.

“So, I’m pretty content with finishing where I have and starting this new career. I’m definitely the type for finishing one goal and looking at the next — and that’s definitely what I’m doing with broking. I’m putting 110 per cent into this. I’ll just ride for fun and leave the professional cycling to somebody else.”